Kevin Bathman is a visual designer, storyteller, curator, writer and social change advocate based in Sydney. He is interested in using creativity to address environmental, cultural and social justice issues, and believes that the arts is an untapped avenue for catalysing change. As the founder of social enterprise, Coalition of Mischief, Kevin has worked on numerous social justice projects with not-for-profit and arts organisations to help them communicate their message better. In 2013, he co-founded Carnival of the Bold, a movement of arts for social change. Since 2012, Kevin has been researching the history, connections and cross-cultural stories between the Chinese and Indian culture for his project, The Chindian Diaries.

Why did you get into promoting more diversity in your projects?
KB:
We are fed an abundance of Hollywood films in Australia – but to me, what that industry clear lacks are a diversity of actors, stories and writers. To be honest, I was tired of seeing the Australian arts and creative sector be dominated overwhelmingly by white, male-driven heteronormative narratives. Why was this sector not reflecting what Australia really looks like? When it came time to curate Carnival of the Bold, I made it a point to include diverse voices – voices that we rarely hear or see, voices that more often gets rejected or sidelined due to its “non-mainstream” narrative.
IW:
Describe one of your favourite moments as a festival programmer?
KB:
During Carnival of the Bold, I had received good feedback from audience members that they were excited to hear from culturally diverse artists and social change. A volunteer said this to me, “I gained  a family or ‘tribe’ and a community. To see so many people from different backgrounds coming together and rallying for the same cause gave me joy, hope and a sense of belonging.” That made me feel the work that we did all felt worthwhile.
IW:
What do Australians gain when they see diversity on the screen? What’s the feedback like?
KB:
A new perspective, a new way of living, a new way of thinking. People generally don’t know what they don’t know. In the arts sector, it takes a brave festival and film curator to expose new narratives to audiences. In many respects, they are bound by the marketability of the film/artist and the need to pander to what their audiences are already familiar with. It then takes tremendous effort to convince funders, board members and committee to go down a new path. Once they succeed, you run the risk of audiences not turning up or keeping away due to its “foreign” content.
My hats off to curators out there who really push the boundaries – its never an easy ride.
IW:
What are you working on now? And what are you working on or would love to be doing next?
KB:
I am working on developing partnerships and collaboration for Carnival of the Bold, as well as developing my Chindian project further with organisations/media in India and China. On the work front, I am looking at incorporating a stronger arts element in health initiatives.   Next up I would love to keep studying socially engaged art further, as well as be an advocate for arts and diversity in any projects I am involved in. I would love to keep working with culturally diverse communities and build their capacity to better represent themselves.
For more info about the AAFFN 2015 Event held in Melbourne this year visit:
https://asianaustralianfilmforum.wordpress.com/this-is-2015/ 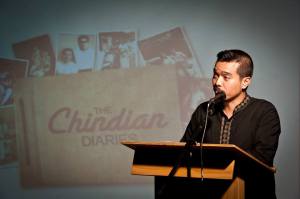 Interview with Joy Hopwood, panelist at the 2015 AAFFN event, by Indigo Willing. 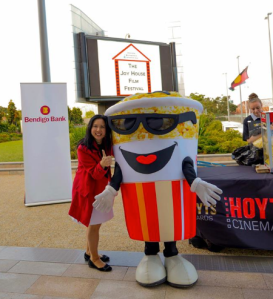 Joy Hopwood was a former Presenter of A.B.C.’s Play School, a writer, blogger, teacher, lecturer, public speaker. She was an ambassador for Mission Australia and Cancer Council NSW and was nominated twice for the Australian of the Year awards. Joy was a contributing writer for Growing Up Asian in Australia (Black Inc Books), Chinese Australian Women’s Stories (Jessie St Library / CHAA) and Reflecting on Life (Pearson Education). She wrote and created “The Wong Side of Life” theatre play, and transformed it into a video form titled “Kindness is for Free” ( an anti-bullying & anti-racism initiative in schools). She also founded and is artistic director of the yearly Joy House Film Festival. Joy blogs, writes, acts & makes films.

Why did you get into promoting more diversity on the screen?
JH:
I founded The Joy House Film Festival, which screens short films of joy & diversity. Due to the lack of diverse representation, I wanted to give a voice to a creative community that isn’t mainstream in the media and therefore our festival not only awards a cash prize for best film but also best Diversity Film and Youth films too, I’m also a founding member of the Media Entertainment and Arts Alliance’s Diversity Committee which the Joy House Film Festival is proudly supported by.
IW:
Describe one of your favourite moments as a festival programmer?JH:
When viewing submissions from all over the world, it’s so gratifying to receive films with great stories of joy and to see a diverse reflection of characters represented on film.
IW:
What do Australians gain when they see diversity on the screen? What’s the feedback like?JH:
This year’s winner – The Present was the favourite by not only the judges but also the general public too because they didn’t expect to see diversity at its best. The film was about a dog given to a teenager as a present and when he opens his present to see that the dog has a disability – no leg, he dismisses the dog and continues to play with his video game. It’s not until the dog’s love and joy towards the boy that he is captivated by the dog’s charm and personality, not his disability. We then see an unexpected ending….I won’t ruin it for your your readers, but the crowd loved this film. Also we had a great documentary by Pearl Tan called Minority Box which showed diversity too. It was an interview with Australian Indian actors who talk about stereotypes and casting in the entertainment industry. This was also well received by the audience because it’s often a subject that isn’t discussed in the industry and there were many comical answers given by the actors.
IW:
What are you working on now and doing next?

I’m busy working on next year’s Joy House Film Festival and busy writing at the moment. I’m also writing a story at the moment and hope to share it with an audience in late 2016.

For more info about the AAFFN 2015 event in Melbourne in November visit: