MEET SOME OF THE CAST AND CREW

MAXIMUM CHOPPAGE is a new six-part series coming up on ABC2 TV in 2014.

Filmed in Cabramatta and other Sydney locations. Produced by Matchbox Productions.

AAFFN’s Indigo Willing talks to some of the cast and crew about their roles and what it means to them to be doing the show. 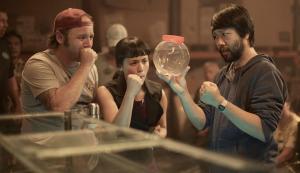 Lawrence Leung. Writer of three episodes. Actor with the most lines. I play the reluctant hero Simon Chan.

One of the best things about shooting Maximum Choppage was working with Dong Tam fight team. Their martial arts skills will make the TV audience’s jaws drop. On the last day of the film shoot, Dong Tam’s Master Trung Ly conducted a moving traditional ceremony to celebrate how far the cast/crew had come as a new filmmaking “family”.

I am always inspired by the talented people I collaborate with. You never stop learning and developing when it comes to creative practice. I’m so lucky to have collaborated with such admirable colleagues in the TV, theatre and comedy fields. 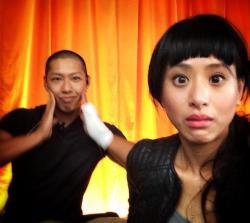 My name is Maria Tran and I hold multi-roles on Maximum Choppage TV Series, from Associate Producer, Extras Casting Coordinator and Stunt doubling for the lead female character “Petal”. The role interchanges between working across departments, and wrangling with extras and in between changing into outfits to get a chair hit or two. J

Other crazy moments that I recall include a lot of the conundrums that the Dong Tam martial arts troupe experience include their laugh out loud boy band impersonations to crazy kinetic spectacular movements. Overall funny moments are truly watching the amazing cast we had on the show, from the trio banter between the characters of Simon, Egg & Petal (played by Lawrence Leung, Dave Eastgate & Stephanie Son) and not to mention other hilarious sideliners which you’ll see once the show is on air on ABC2 in October this year.

It is most definitely furthering Asian representation on screens and telling untold stories from this demographic. I grew up dissatisfied with Australian film and television and witness the same types of stories (mostly stereotypes) and depictions as Asians play the most obvious kinds of sidekick roles and Maximum Choppage is perhaps, Australia’s first of its kind, a huge Asian Australian casted film project set in one of Australia’s most Asian diverse regions of Cabramatta. 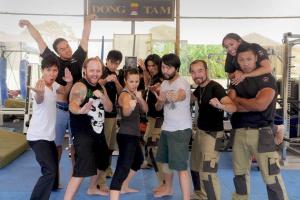 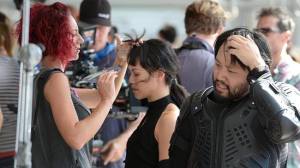 My name is Stephanie Son and I play Petal in Maximum Choppage. Petal is best friends with Simon (Lawrence Leung) and Egg (Dave Eastgate) and is a straight-talking, no BS kind of girl who’s never afraid to back away from a fight. Some might say she starts fights – but that’s just conjecture of course.

When you’re an actor, the work itself is what’s most inspiring – which can be challenging if you’re in-between projects. But when you’re working on a project where the writing is so good and the people you work with are so talented – it’s not a hard task to get up in the morning (even if it’s 4:30am) and turn up to work because once you’re on set, the experience itself is so much fun, it’s really just playtime for an actor. Both Lawrence and Dave are so clever and funny, you can’t help but strive to be just as good as them, just as funny. We had some great supporting cast as well, including Darren Gilshenan, Amanda Bishop and Anthony Brandon Wong, who were all so wonderful to watch and act with. They’ve had so much experience that it was just a joy to be able to work with them and watch their process and learn from them. I suppose that’s what keeps me going in the end, even when I’m wondering when the next project is going to come along – that genuine curiosity and desire to keep learning – it keeps you inspired and motivated to be an actor. 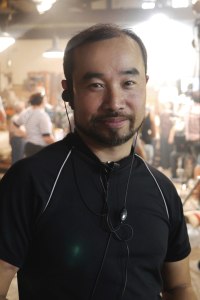 Trung Ly. I am the Fight Choreographer for the series and my role is to assess the cast for fight action character training and devise action sequences that gel within the scope of the script adding to the story and the vision of the director, Craig Melville. Also making sure there was continuous training and evaluation of the cast before and during the shoot, plus figuring out the smashable, breakable props required for a safe and enjoyable time on set.

The talents who’s character don’t have much of a fighting role after assessment they are actually good and the ones that have major fighting roles don’t have screen fighting experience. I find it funny it was a bit of a challenge, but it all work out in the end and we enjoyed doing it. I did throw a plate into Lawrence’s head hit him square on side, he dropped to the ground then stood up in pain and gave his lines, its was gold! really awesome scene.

I love problem solving and working with lots challenges creates an atmosphere that I belong and thrive. Also I’m very happy that something this different to mainstream TV gets made , truly it is very unique and very enjoyable to be a part of. 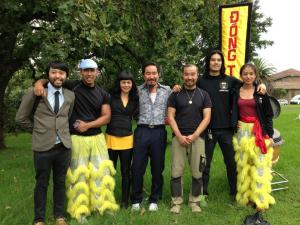 Maximum Choppage is due to screen in 2014. All images used for this article were supplied by Maria Tran.