Gondwanalandings: towards a diasporic imagination in Australia

This is an event review of a conference titled, ‘Gondwanalandings: Voices of the Emerging Indian Diaspora in Australia’ that was held in Melbourne last month. I would like to thank my co-organisers (Roanna Gonsalves, Devaki Monani and Ana Tiwary) for their support, the Australia India Institute and the Australia India Council for funding the event, and all the participants. The full program is available here: http://www.aii.unimelb.edu.au/sites/default/files/gondwanalandings%20programme%20%281%29.pdf

When I first suggested the idea of an Indian diaspora conference in Australia as a response to the Australia India Institute’s ‘Beyond the Lost Decade’ taskforce report, I never thought it would one day become a reality. Now, almost a month after the event, I am not just grateful that a personal and collective dream came true, but also pleased that it has laid the foundations for future diasporic endeavours, both formal and informal.

On the surface, the Indian diaspora looms large in the imagination of not just persons of Indian origin, but also of non-Indians who have been exposed to the ‘soft power’ of India-based or Indian-inspired literature, film, and other creative arts. You have only to scan the short-lists of the English-speaking world’s major literary prizes, or the programs of renowned international film festivals to get a sense of the cultural capital of India and its diaspora. However, Indians living in Australia are only beginning to gain critical mass and have a significant cultural and political voice in the wider community. We have yet to produce our very own world-conquering Deepa Mehta or Jhumpa Lahiri, but we have started creating the conditions for such talent to emerge, and for it to be nurtured.

With this in mind, the two-day Gondwanalandings conference held in Melbourne on the 26th and 27th of September aimed for a mix of critical, community, and creative voices. The program consisted of three plenary sessions with leading South Asian scholars – namely, Brij Lal, Devleena Ghosh, Purnendra Jain, Kama McLean, and Mridula Nath Chakraborty. The panels were on themes ranging from gender in the diaspora, Indian-Australian literature and publishing, media, language and cultural production, as well as perspectives from prominent creative practitioners.

As the chair of the conference organising committee, I often had to put pragmatism before depth of dialogue, but I hoped that this was only the beginning of the conversation. It is also challenging to be inclusive in a community as diverse as Indians in Australia, and manage visionary goals with budgetary constraints and external funding partners. The community support, however, has been overwhelming, and has emphasised the need to include those of non-Indian origin within a paradigm of inter-cultural communication that includes intersection with settler, Indigenous and other migrant narratives. In a world that is straddling the twin forces of homogenisation and indigenisation, there is no better model of global yet rooted citizenship than that manifested in diasporic communities. 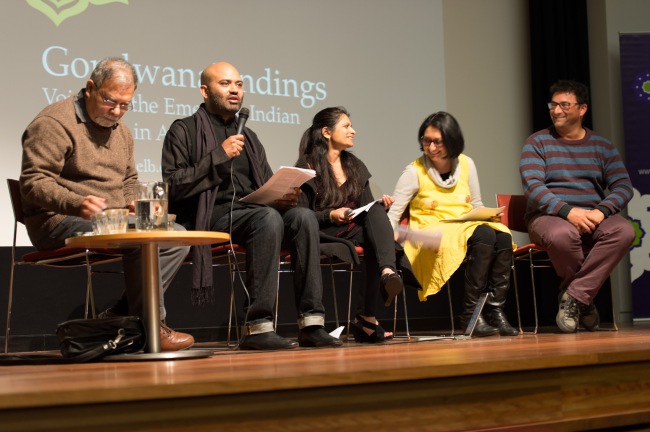 The Indian diaspora in Australia, given its strong connections with a rising India, a vibrant Australia, and established Indian diasporas elsewhere, is especially well-positioned to be a migrant community that is culturally and politically pro-active. We must have the occasional critical symposium alongside the myriad celebratory Diwali melas. We must make our own films, along with enjoying the bounties of Bollywood. And most importantly, we must strive to engage with those who may not share our religious or regional identity, but are similarly involved in trying to survive and thrive in an era of unprecedented confusion, and unprecedented creativity.